Wynnum's summer temperatures may be several degrees cooler than Brisbane central but there are plenty more reasons to visit this charming seaside village.

Firstly, the foreshore walks here are amongst the bayside's best, starting at the northern end with the ethereal Mangrove Boardwalk, with observation seats and insights into a unique water world and its inhabitants. 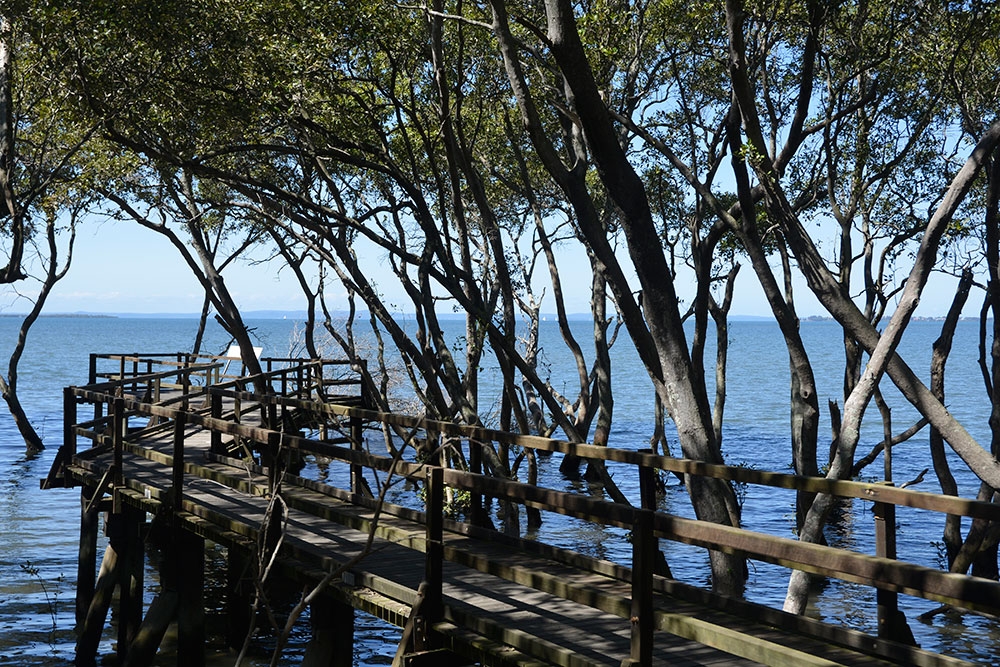 Moving south, the 1930s built sea wall at Oyster Point has one of the bay's best contemplation benches jutting out to sea while Wynnum Creek, which runs inland from here, is crossed by the historical Fox Street Bridge dating back to 1921. The Wynnum fish markets, established shortly afterwards and having their heyday in the 1930's, have been the drop-off point for local trawlers ever since.

The south side of Wynnum Creek sees the start of the main part of the Wynnum Manly foreshore walk which hugs the sea all the way to the Manly Marina, taking in the tiny white sand patch of Pandanus Beach, the Depression era built tidal wading pool and a fantastic children's water park featuring aquativity and a host of play equipment, and further along, the historic Wynnum band stand. But there's more to Wynnum than meets the sea – its town centre, perched up on the ridge of the hill retains much of the character of the mid - 20th century, with many shops still with their wood-framed doors and display windows.

And a walk around the main streets finds a charming old-fashioned blend of businesses – from fabric, stationery, curtains, book and sewing machine repair shops to continental delis, galleries, cafes and Brisban'e best collection of op shops.

Worth visiting in particular are The Collective Store, a fantastic little emporium of wares and clothes all hand made by artisans. For sustenance, head to the Green Bean Café, a cute little art-adorned cafe dedicated to healthy fare, or, if after some great food and a glass of wine, head for cafe and wine bar Cedar and Pine or The Rabbit Hole Cafe & Bar.

Shopping aside, Wynnum is also an area steeped in history, starting with Tingal Road which was one of the area's earliest thoroughfares and whose nearby Tingal Hill was traversed by Pamphlett, Parsons and Finnegan, the sea-faring ex-convicts who were blown off course heading south from Sydney in the early 1820s and whose meeting with Oxley was the foundation of Brisbane's geographical location.

Few relics of history remain on this road except for the well-preserved Shire Clerk's Cottage c1890, (tucked away in its original site that once included the long since demolished old Council Chambers) and the 1920 built grand regency Masonic Hall and the matching Wynnum Ambulance Station c1926.

Other heritage buildings of note dotted throughout are the RS Dods designed Mount Carmel Convent and Post Office c1923, both in Bay Tce, the former Fire Station in Mountjoy Tce and the austere hilltop Nazareth House. Meanwhile the Waterloo Bay Hotel, with its landmark fig trees, had its fortuitous beginnings six days after the opening of the railway line to Wynnum in 1889 and still packs a crowd today.