Scarborough In A Day 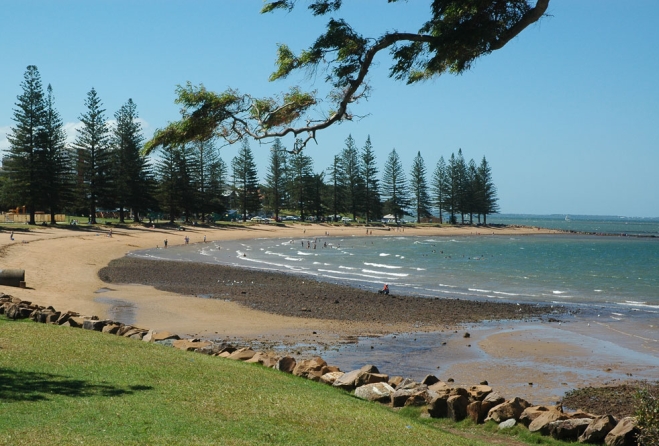 At the northern tip of the Redcliffe peninsula the picturesque seaside village of Scarborough is a destination well worth travelling the extra mile for.

Once a sleepy hamlet of wooden cottages, its claim to fame is that in the late 1950's home it was home to the young Bee Gees, whose house at Fifth Avenue still stands. It was during their tenure at Scarborough that the Bee Gees enjoyed an idyllic childhood and that their musical career began after being 'discovered' at the Redcliffe Speedway by manager Bill Goode and picked up by radio DJ Bill Gates. Today it is an idyllic spot for both residents and visitors alike, with fantastic sea front walking paths, top notch cafes, and at its centrepiece a sprawling Norfolk-Pine lined seafront park that connects via walking path to Redcliffe and contains the best young children's playgrounds on the peninsula – Pirate and Railway Places. A small grove of cottonwood trees as part of the playgrounds provides possibly the only council-sanctioned tree-climbing opportunity for small and big kids in the country. Fronting the park is a charming strip of shops and eateries that, despite their laidback character are quietly sophisticated. Valori Espresso and Gallery is a little espresso nook come art gallery that serves up coffee sourced from local roaster Neli Coffee and 3 Eight Nine is a reliably good source of breakfast and lunch. But a day at Scarborough is made for walking and the best walk – from Scarborough to Newport - starts at Pirate Park and hugs the headland for 4km one way, taking in the Bee Gees house and tiny pocket parks before emerging at the Scarborough Boat Harbour, with its long isthmus of picnic shelters and massive long-held institution Morgan's Seafood.

From there it's a lesser trodden scenic waterfront path with views in the distance to the Glasshouse Mountains - this continues to residential Newport before returning the same route. For a spot of culture (and a small homage to the Bee Gees) the Redcliffe Museum, inland to the south, is a fascinating well-curated time capsule of the area, including a 15 minute film of the history of the area inside a mock-up of the old Pier Theatre.

And whether in the middle of the day or at sunset few things can match fish'n'chips from the Boat Shed in the green expanse of Scarborough Park, one of the bay's quintessential experiences. If a day's not enough the excellent Scarborough Beach Resort, with well-appointed family friendly short stay apartments, is located in the midst of the eating strip, with most apartments having balconies to linger over the sweeping sea views to Moreton Island.