The historic city of Ipswich has a fascinating past, with haunted sites and ghost stories to tell. From old lunatic asylums, castle ruins, mysterious grand mansions, an old flour mill and a 150 year old cemetery, here are some of the haunted places where ghosts are said to have been seen. You can even take a spooky tour of some of them: Woodlands of Marburg, circa 1870, is Ipswich's grandest Victorian mansion and it is said to be haunted by the ghosts of its first owners as well as former priests who died there from when it was a Seminary from 1945. Ghostly sightings include the spirit of a former servant who fell to her death down the main staircase, while Mrs Smith the original owner has been seen in the master bedroom and young child Billy (who drowned in the pool) has been spotted running around the first floor. You can take a 2 hour ghostly tour with a medium to experience for yourself
more 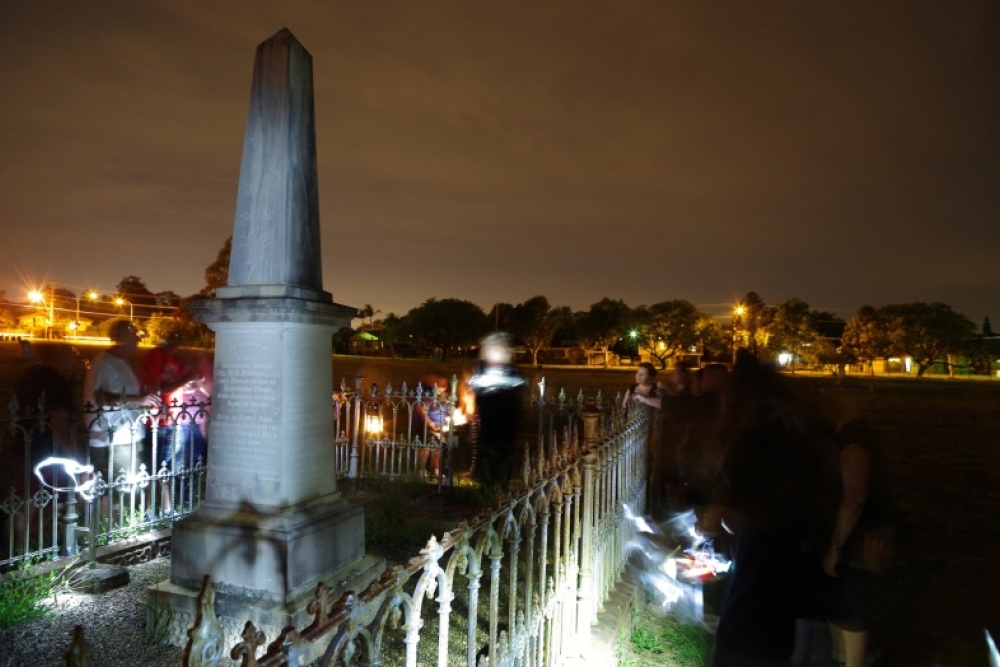 One of Ipswich's spookiest historic sites, Ipswich Cemetery is the place to take a fascinating ghost tour under the cover of darkness. Those who grew up in Ipswich considered “spook hunting” a great weekend pastime, with one of the most spine-tingling places the Old Ipswich Cemetery. Located on the edge of town, opposite a former mental asylum, this 150 year old graveyard is the final resting place for hundreds of pioneers and their descendants as well as Ned Kelly's brother Dan
more Blackstone Castle was the name locals gave to the palatial 49-room mansion Brynhyfryd that once stood atop Blackstone Hill. Built by Welshman Lewis Thomas in 1891 the mansion had its own passenger lift, electric lights, servants quarters and there was a live-in chauffeur. Lewis Thomas died in 1913 and his wife in 1930. After her death the mansion was bought by Rylance Collieries and over time dismantled. While the house was still standing, people said they could see the ghosts of Mr Thomas and his wife standing in the windows. Today you can walk through the reserve, where all that remains is a brick staircase and some walls of the dairy
more Established in 1878, Sandy Gallop Asylum was built as a branch of the Goodna Asylum, then from 1910 it became known as the Ipswich Hospital for the Insane, and then, in 1938, Ipswich Mental Hospital, before being renamed The Challinor Centre in 1968. Today the main building still stands, and since 1997 it is now part of USQ campus. Over the years the centre has housed those deemed criminally insane, those with intellectual disabilities and girls who had been classed by the courts as delinquent. Since the centre closed, security guards have been privy to weird unexplained activity by night. It's been a long time since a siren was heard at Ipswich's old ambulance station, which stands on a North Ipswich corner. But the spirit of its founder, former superintendent W.C. Tomkins, is said to live on in the historic building, which dates from 1901. Superintendent Tomkins lived upstairs above the station, where he died in 1934. The story of his ghost still haunting the building, rattling blinds and moving from floor to floor has been perpetuated over the years by ambulance officers who worked there, Some were even too scared to go upstairs at night

The iconic landmark at Top of Town has seen better days in its rich history but the building is still a unique source of fascination. And according to historian Jack Sim, it is one of Ipswich's most haunted, by the ghost of Hubert, a young worker at the Flour Mill who had been ill with scarlet fever. As he felt better, he returned to work, but was unable to work properly as he had not completely recovered. Told to work harder and sweat more, he went on to collapse and die on the lower floor of the mill. His presence has been felt over the years, in the evening seen as a shadowy figure in a coat  and, when there was a restaurant in the building, cutlery on the hallway tables would sometimes be disturbed